I actually drew this back in June, in honor of the passing of Adam West. I’ve just been behind in getting things up on the blog, even though I’ve still been creating a lot of different things the last few months. 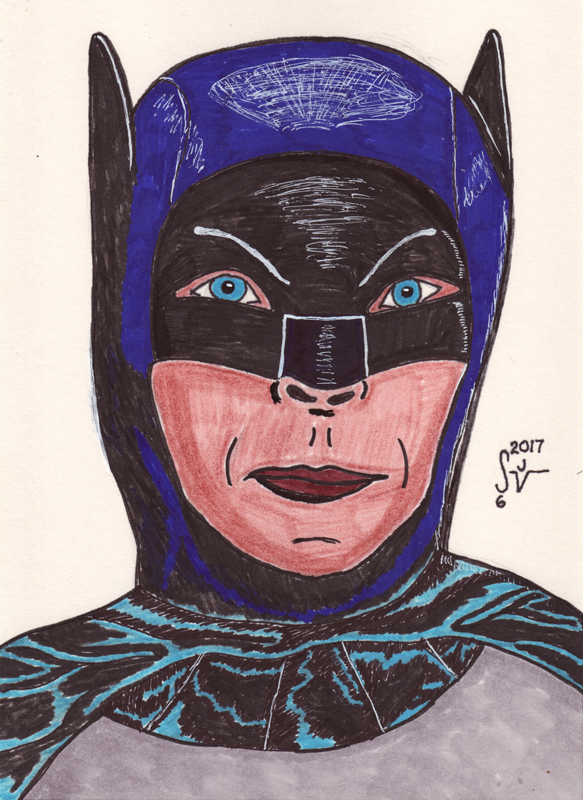 As a kid in the 1970s, I remember the old Batman TV show coming on around 4:30m or so every day. I didn’t get to watch the show in its original run, but I got to watch it every day! It was a fun show and had lots of actors I recognized seeing in other places too. I know for a while the campy fun of this version of Batman kind of fell out of favor with fans… or at least casual fans… but there has been a recent surge with the Batman ’66 comics and the release (finally) of the classic TV show on home video.

It’s also been fun to hear Adam West as the mayor on Family Guy. He is a big part of that show. Not just there because Seth MacFarlane liked him, which of course is also true… but Mayor Adam West on the show is tied up in lots of shenanigans on that show and his voice will be missed there.

I’ve also long campaigned for DC to have made a live-action Batman Beyond movie with Adam West cast as old Bruce Wayne mentoring the new young Batman. I think Adam West’s acting skills are often overlooked because of his jovial personality and how well he slid into the camp of the classic Batman… but I have no doubts he would have been stellar as a more serious version as well, and it would have been a nice nod to his stint in the role back in the 1960s… but now, unfortunately, we will never know.

There was a recent home video classic-style Batman animated movie with Adam West, Burt Ward, Julie Newmar, and others… and my understanding is Adam West had already completed his voice-over work for a sequel to that… so we will get to hear him one final time as the caped crusader in the future. It’s a shame he is no longer with us, but it’s nice that he went out on many high notes with a whole new generation of fans appreciating him once again.

My illustration, incidentally, is hand-drawn on a 7×10 in. comic backing board. It’s not an exact likeness of course, but I tried to get a little Adam West in there so that it wasn’t just a generic Batman bust illustration. I generally like how this one turned out. Let me know what you think.

Remember, if you’d like an original commission by me or would like to hire me as an Illustrator, please use the Contact page and let me know as much as you can about your request.

*Be honest… who didn’t see this coming?  I mean, besides Bob, of course. 🙂

*How did that work with the costumes and the batpoles anyway? 🙂

It’s the end of a long day, that while the day has ended (in terms of it being night and also the next calendar day already) I have not yet gone to sleep, so it hasn’t entirely ended for me yet! I’m still unwinding after a long but fun day at the Raleigh Comic Book Show. I enjoyed seeing many old friends again, making a few new ones, and even a big surprise.

I was there with fellow guests Michael Eury and Buddy Prince. This was my third time appearing at a show with Buddy Prince, but the first time I was not sitting directly beside him. Sandwiched between us was Michael Eury. While I was familiar with some of his work (writer/editor for Comico, DC, Dark Horse, and Back-Issue Magazine) I had not met him until today. In between mingling with convention attendees, I got to spend a bunch of time talking with Mr Eury. He is a wealth of knowledge and experience, and happens to enjoy many things that I too enjoy… such as old EC comics, like MAD, or the Batman 1960s TV show!

I had a bunch of new prints for sale that I didn’t have for my last convention appearance, and lots of new art that was not a part of my portfolio last December. I also engaged a lot of new comic fans, kids and adults, that I hope to have turned on to my ‘Sects comic strip as I told them about it and handed out more of the promotional character cards I had made for my last convention appearance.

Had it not been for a surprise in the afternoon, getting to meet and talk with Michael Eury would have been the highlight of the day. Meeting new and interesting people is usually the highlight of any convention appearance! But today that was trumped by an unexpected surprise…

I play quite a bit of Words with Friends on my phone. Every once in a while someone asks me about my avatar there and I’ll explain that I drew it and that I have a blog. I try not to be too preachy because I don’t want people to think I’m only playing the game to sneak in self-promotion! But every now and then I connect with someone and we play a lot and they develop a sincere interest in my blog too.

So, imagine my surprise when one such friend surprised me today by driving up with his wife from South Carolina just because he knew I was going to be a guest at the show today! It’s a pretty cool spontaneous thing for someone to do, especially since it marks the first time he and I have actually met outside of the game, though we have been playing for so long now that I’ve lost track of everything except how soundly and often he has been beating me lately! 🙂

Long story short… I met a friend for the first time today, who went out of his way just to come meet me AND he bought a couple of prints from me! I met Michael Eury and he bought a print from me! I connected with a lot of new people who I hope will become regular readers of the blog and my comic strip… and now I am VERY tired and need to sleep because I have a lot of errands to run on Monday.

Thank you to Lyn Anderson for inviting me… thank you to all the comic book fans who came out today… and thank you, in advance, for everyone new to my blog who I hope to see start following me real soon!

Because I demanded it! The costume bust illustration series continues… As already established in a previous blog entry, I am a fan of the classic Adam West Batman TV show from the 1960s. As such, it was only natural to create an illustration of the Batgirl costume from that TV show.

I’m really happy with how this one turned out! I decided to draw to her waist on this illustration, because it just didn’t feel right not to include those gloves. Feel free to imagine Yvonne Craig in there, even though I didn’t draw her. Who will be next in this captivating costume-only series? Will the annoying alliteration be amped further? Stay tuned to this same bat-blog for the next extremely exhilarating entry!

By the way, here’s a link to the inaugural entry in the costume bust illustration series, in case you missed it. Remember, if you are interested in requesting my services as an Illustrator, please use the Contact page and let me know as much as you can about your request.

There has been a resurgence in the popularity of the Adam West Batman TV series from the 1960s lately. Blu-rays and DVDs of the entire series finally were released last year, and DC has an ongoing Batman ’66 comic book series! As a child of the 1970s, I missed this as a new TV show, but it was on after school in syndication and I remember watching it every day as a kid.

I wanted to draw a car, or a truck, and I considered drawing my truck actually… but then it hit me. Why not take a stab at an illustration of the classic TV series Batmobile? So… from my brain, I stab at thee, for art’s sake I drag my last stroke at thee!

Please let me know what you think. Oh, and apologies to Ricardo Montalban, Khan, and Herman Melville for that lead-in! Remember, if you are interested in requesting my services as an Illustrator, please use the Contact page and let me know as much as you can about your request.